The Pine Lodge Cemetery is the largest lawn cemetery within the Greater Shepparton municipality and is the cemetery of choice for those preferring a non-denominational lawn cemetery rather than the traditional monumental cemeteries.

Over time the number of Trustees declined as did the number of burials.  Records indicate that there were no interments undertaken by the last volunteer Trust from early 1956.  The last remaining active Trustee, Bill Sadler, approached the Shire of Shepparton regarding taking over the cemetery Trust.  The “Council of the Municipality of the Shire of Shepparton” was subsequently gazetted as Trustees of the Pine Lodge Cemetery Trust on 8 January 1971.

The Shire of Shepparton developed plans for Pine Lodge Cemetery to undertake a transition from a bush cemetery to a lawn cemetery.  Work began clearing the area and water reticulation with the assistance of a Cemeteries Registration Board grant in 1971.  The first interments in the newly established lawn sections occurred in 1972.

After the local government amalgamations in 1994 the Shire of Shepparton was incorporated into the newly created Greater Shepparton City Council (GSCC) municipality with the responsibilities of the Trust transferring with it.

On 21 February 1997 the Pine Lodge Cemetery Trust purchased 26.9 acres from the southern boundary of the original cemetery to the Broken River to allow for future expansion.  As this land was purchased in the Trust’s name it was subsequently transferred to the Crown in 2016 and identified for cemetery purpose use.

As of 1 July 2021 Pine Lodge is formally a part of the Remembrance Parks Central Victoria cemetery group.

The Pine Lodge Cemetery is located 16 kilometres east of Shepparton on the Midland Highway heading towards Benalla. 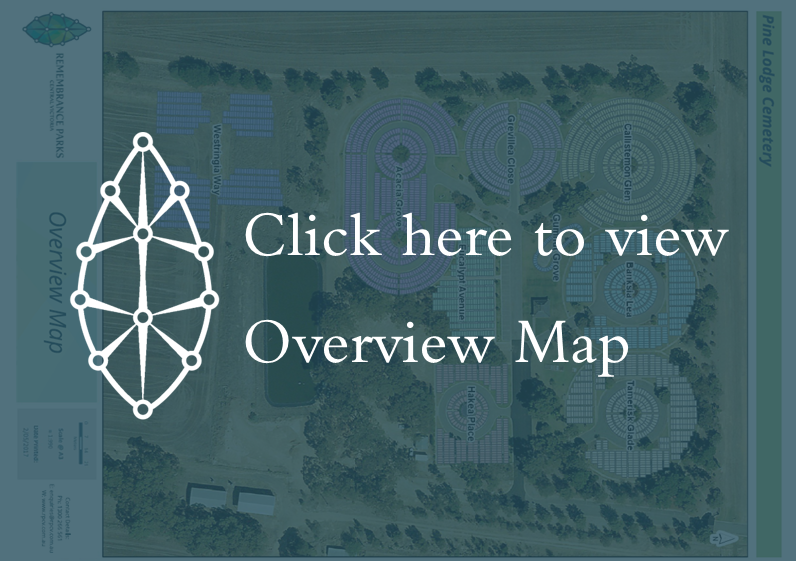