Bendigo has extensive lawn and monumental burial areas and offers a range of memorial options including traditional monuments and modern bronze and granite lawn plaques. 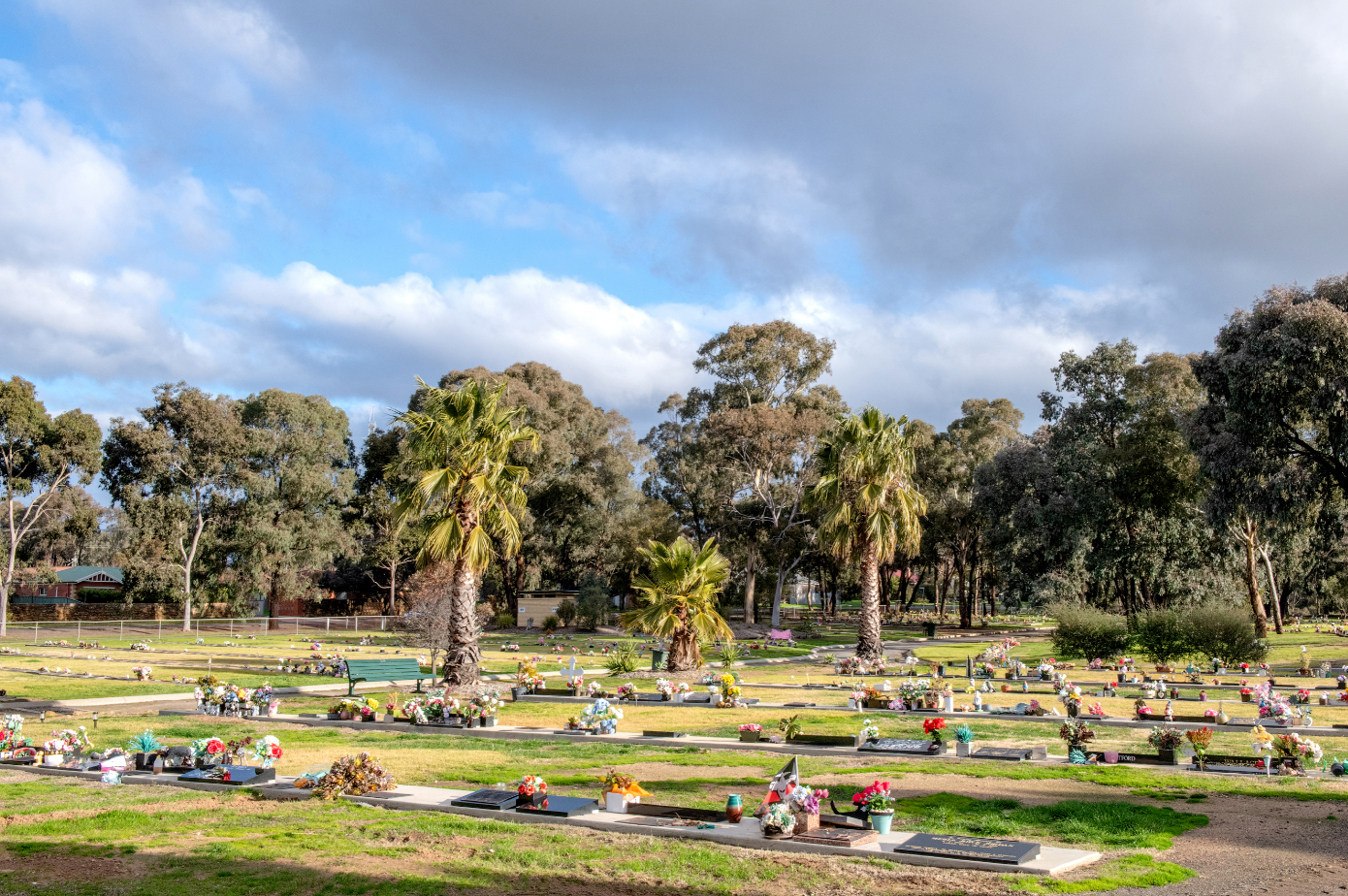 Rich in history, the monumental section has been heritage listed by Heritage Victoria and contains several monuments of historic significance, many dating from the nineteenth and early twentieth centuries.

The first registered burial at the Bendigo Remembrance Park was recorded in February 1858; at the time this site was known as the Back Creek Cemetery. This site has also been known as the Sandhurst Cemetery, not to be confused with the Sandhurst Burial Ground in Bridge Street.

Land for the cemetery was not officially gazetted until 1875. 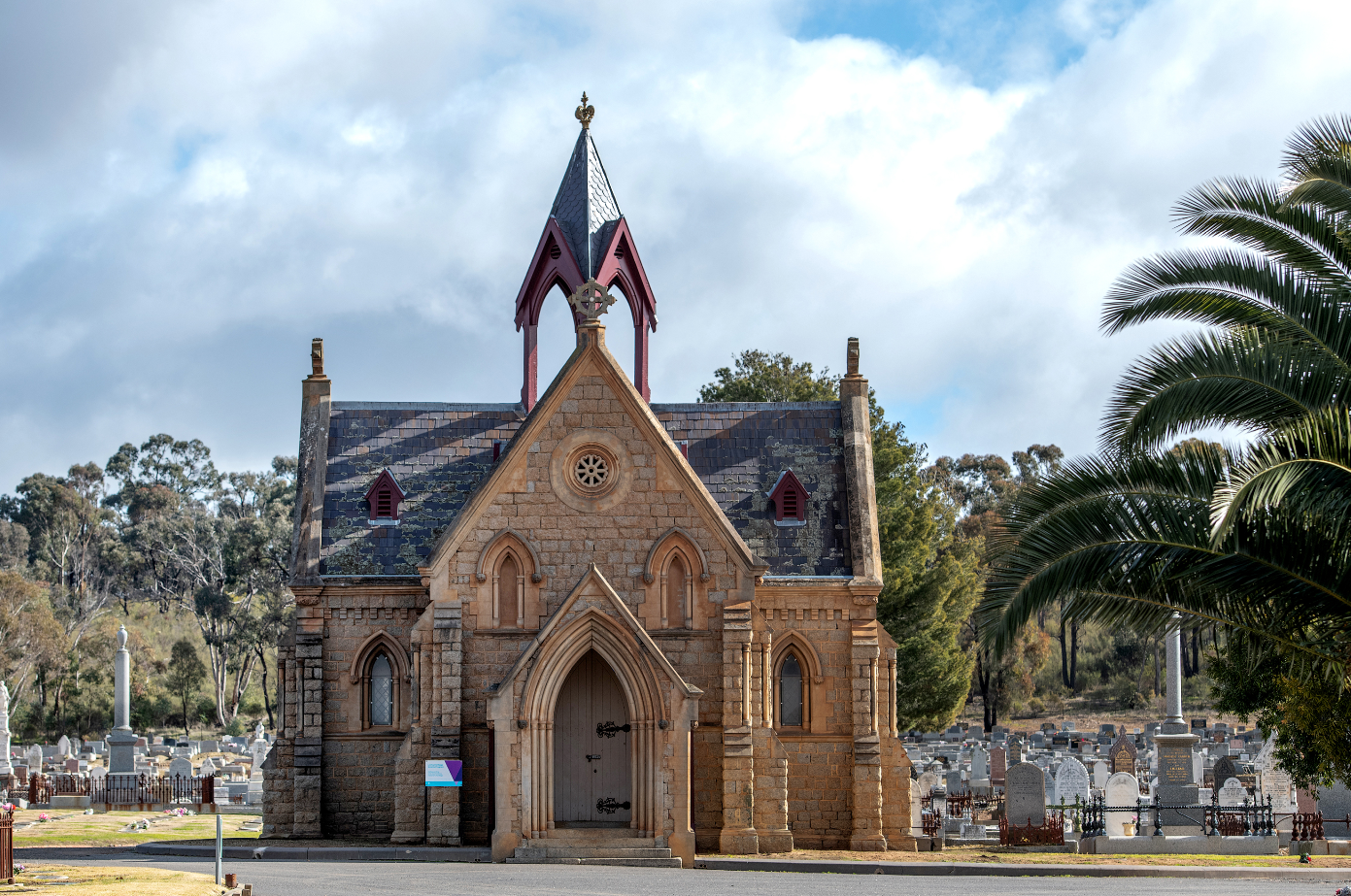 At this remembrance park, you will find the Bendigo Chapel. Situated just inside the main entrance on Carpenter street, this picturesque building welcomes all who enter the park.

The Bendigo Chapel was built in 1873 and was designed by George Avery Fletcher who at the time was town clerk, surveyor and cemetery secretary.
Unique in its Gothic Revival style, the chapel is built from Harcourt granite. The building is designed in a distinctive cross shape, with the main entrance facing the east, and side exit doors facing the north and south.

Other unique features include its belle fleche adorned with a golden finial, taking pride of place atop the chapel. Historically the chapel was used as a space to conduct funeral services, with coffins placed on trestles such as those on display inside the chapel. Sunlight filtering through the stained-glass windows provides light to the interior which has no electric lighting.

A Living Heritage grant of $200,000 was awarded in 2017, which allowed for restoration of the roof, bell fleche, interior floor and stormwater drainage system to begin. Works were completed in May 2018.
The conservation works allow the multi-denominational chapel to once again be available for a range of events including weddings, music recitals, receptions, as well as to be used for its original function to again host funeral services.

Other features of prominence at the site include the former Sexton’s residence, seen near the main entrance gates and the Burke and Wills Monument in monumental section G3.

This tribute to Australia’s pioneering explorers was erected by the people of Bendigo. It appears to have had a paint finish but clearly a sandstone column. The foundation was laid in 1862 and more than 5000 people were in attendance. History indicates that objects of the time were buried at the site. 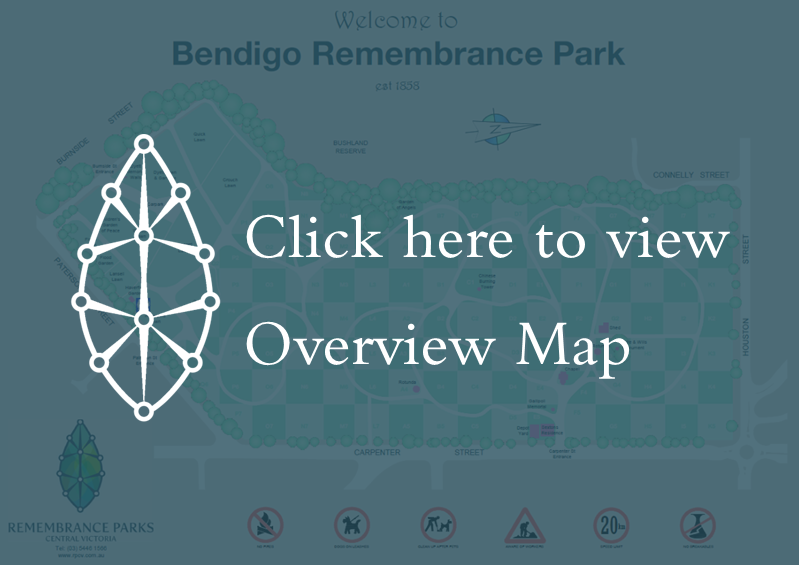 Previously, lawns were numbered or lettered as a form of identification.

A comprehensive list of the old and new names can be found on our Fact Sheet No 4 here.
The following map reflects both the old numbering system and the new named lawn areas. Some signage at the park reflects the old lawn names.

Stand among a remarkable collection of artefacts reflecting the city’s gold past at the Bendigo Remembrance Park. It gives you a sense of the energy that our regional city of Bendigo once experienced.

Partake in our self-guided Notable Graves Tour to uncover the stories of Bendigo's pioneers and learn about the rapid changes driven by the Gold Rush. Now one of the largest regional cities and tourist destinations, Bendigo will always be thriving from the efforts of our past

Markers situated at each grave site identify each notable grave and have a QR code that can be scanned to obtain further information at the site.